THE "ASKOLD" CRUISER IN THE GALLIPOLI BATTLE

In 1915 the "Askold" cruiser was already a famous ship. Ten years before her name became known to every naval seaman when on the 28th of July, 1904, in an engagement with the Japanese cruisers "Askold" broke free through the enemy encirclement. She was one of the few Russian ships of the Port-Arthur squadron, which escaped the Japanese captivity. 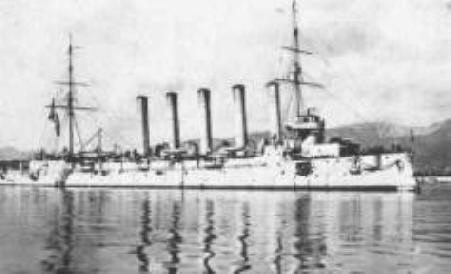 10 years after "Askold" found itself in the squadron of the French Rear Admiral Gepratt in the Eastern part of the Indian ocean where from the outbreak of WWI she had been hunting German raiders. "Askold" had come to the Mediterranean from those waters. The Russian naval command agreed upon the participation of the ship in the Dardanelles operation, in which "Askold" was meant to support a diverting landing on the Southern coast of the passage. Her task was to shell the forts of Kum Kale and Orkanie from a close distance and, if not to silence them, at least, to divert their attention from landing transports. In the meantime 3,000 riflemen of the French 6th colonial regiment would have to land on the coast. "Askold" also had to provide a launch and some boats for their transportation to the beaches. It was an uneasy task for the Russian cruiser. She was a light one with no armor belt and she had to engage with the forts 210-240 mm cannons. The main trick for "Askold" to avoid enemys shells would be prompt, sharp maneuvers and permanent change of her position, but in the narrows of Dardanelles all that could become self-destructive: despite the regular trawling operations, the waters of the Narrows were merely teemed with mines. Nevertheless, Admiral de Roebek, the Commander of the Allied squadron, allocated the cruisers to provide a fire support for the landing troops.

"Askold" was to operate along with a French cruiser "Jean d'Ark". In the morning of the 12th of April, 1915 the ships were ferrying along the coast showering the Turkish positions with shells. But the Orkanie fort and mobile batteries kept silent An officer from "Askold" lieutenant S.Kornilov led launches and boats to a transport "Van Long". French colonial soldiers began to jump down as during a drill. When the first echelon of the riflemen approached the beaches, the Turkish infantry men suddenly filled disguised trenches, and bursts of excellent German-made machine guns tore the air. Simultaneously the fort guns opened fire. A shell explosion overturned a boat and black soldiers went to the bottom, but did not let the rifles out of their hands. "Askold" and "Jean d'Ark" were endlessly changing their positions, trying to impede the enemys accurate aiming. The Russian cruiser managed to have it done but "Jean" was not so lucky: a 240 mm shell hit her forefront gun tower. All tower crew was lost, a fire set upon the forecastle deck of the cruiser.

About 11 o'clock in the morning when a third wave of landing reached the coast, a large plane slipped above the squadron in a cloud of smoke and dropped four bombs. They fell next to "Askold". The deck command had to frighten off the plane with the rifle fire for there was no AA artillery on "Askold" - she had been built prior to the beginning of the battle aircraft era. Good luck was with the Russian cruiser. She took part in the most risky action but had not received even a scratch. Nevertheless, the crew of "Askold" lost four seamen killed and nine wounded  all were from the landing craft...

The firepower of the cruiser was not sufficient to silence the fort guns, but on the 12th of April her 6-inch guns made 500 Turkish soldiers surrender during the shelling of the town of Enisher. The Turks dropped their arms and went across the no mans land to surrender to the French landing troops. The Kum Kale landing diverted two forts and two artillery divisions. In the night of the 13th of April the Command decided that the task had been carried out, and the ships of the squadron took the troops off the coast. Admiral de Roebek generously signed recommendations to award the heroes of the operation. The "Askold" lieutenant S. Kornilov was awarded with three highest awards of all Allied powers at once. The French award of the Legion of Honor, English Victoria Cross and a Russian St George Cross decorated uniform of a young Russian officer.

A day after "Askold" entered the Narrows again. The cruiser had never had to shoot so much, even ten years before, during the defense of Port Arthur. The mobile Turkish batteries, having made some volleys, were constantly changing their positions and disappearing in the hilly landscape. It was necessary to search for them to provoke new volleys and to aim the guns anew. It was similar to a game with death, but the battle experience of the "Askold" crew and the phenomenal luck accompanying this wonderful ship since the first days of service saved her from heavy damage. Only once on a six-inch shell exploded next to it and hot splinters left some noticeable scratches on her scull. Fortunately, nobody from the crew was hurt. Having spent two thirds of her ammunition store and having burnt in boiler-houses almost all available coal, "Askold" was let off by the Admiral to replenish the ammunition and fuel on the Lemnos island. Firstly Gepratt planned to give the crew a short rest and then to use the cruiser again against the Orkanie and Kum Kale batteries, but it had become known that the Turks had received reinforcements. Besides, the intelligence had been enabled to analyze the results of shelling of the Turkish forts.

It was concluded that the shells of naval ships, and, especially - light shells of the cruiser guns are not always effective against forts. Admiral Gepratt decided not to test fortunes and not to send "Askold" under the fire of coastal batteries anymore. The Russian cruiser was detached to hunt steamships-smugglers in the Mediterranean and never returned to the waters of Dardanelles. In 1916 after repairs in the French port Toulon she joined the Arctic flotilla of the Russian fleet.