DIPLOMATIC MISSION OF THE "GROMOBOY" CRUISER

The "Gromoboy" cruiser recently built on the Baltic wharf in St-Petersburg had been sent to the Far East to reinforce the Pacific squadron, and initially its call in Australia had not been planned. Changes into her navigation plan were introduced already en route, and on the 16th of February (old style) the cruiser commander K.P. Yessen* was ordered to call in Melbourne. The reason for it was that in autumn 1900 the Russian Foreign Office was advised that representatives of the English Royal Court the Duke and Duchess of York would arrive to the ceremony of opening of the Australian Federal Parliament in the first half of the year 1901. It had been viewed as necessary to send a Russian naval vessel to the Australian waters out of considerations of diplomatic etiquette. 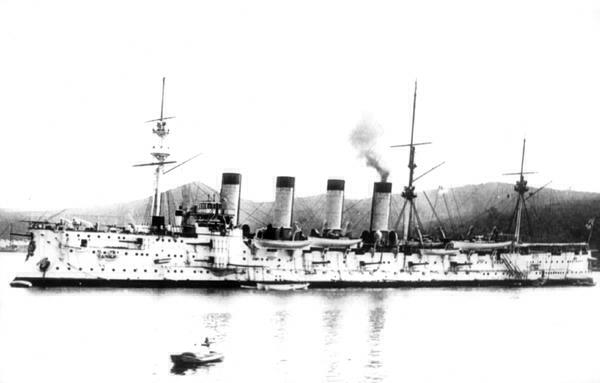 On the 19th of February (old style) 1901 the Russian Foreign Minister V.N. Lamsdorf wrote to the Naval Minister that dispatch of a naval vessel was not a political act but had to be considered as an act of international politeness caused by political considerations. The Tsar was reported about the necessity to send a ship. Unwilling to drop the Russian prestige Nikolay II wrote his resolution on the report: "Its desirable to send a cruiser".

"Gromoboy " arrived to Melbourne on the 30th of April 1901 after a short call in Albany. From the Yessens point of view (his photo on the left side), his task had been implemented successfully. The crew of "Gromoboy" took part in a welcome ceremony and escort of the Duke and the Duchess of York along with crews of German, American and Dutch ships which also had come for the celebration. The beautifully decorated cruiser carried out artillery salutes nearly every day. Yessen and the ship officers were among guests at the ceremony of opening of the first session of the Federal Parliament on the 9th of May 1901 and, of course, took part in numerous official receptions. In turn, the Australian officials paid several visits to the Russian ship. On the 7th of May the Duke and the Duchess of York visited "Gromoboy" and, as Yessen affirmed, were impressed by the size and battle power of the cruiser. As the captain of "Gromoboy" guessed, an indirect confirmation of the success of the mission was that fact that The Duke of York had considered it necessary to refer straight to Nikolay II and request him to allow Yessen and his ship to accompany him and the Duchess as an honor escort to Sydney. Yessen also organized onboard of "Gromoboy" a reception, for which more than 500 invitations had been sent out.

Nevertheless, from the point of view of the Russian Consul in Melbourne N.P. Passek, the Yesens mission had not been organized as perfectly as it seemed to the Russian captain. The Australians considered it as their duty to express their gratitude to Russia at all official receptions for the attention provided to the just created Australian Federation, and the arrival of the Russian cruiser to the celebration was considered as a sign of this attention. Passek considered this visit from a similar position. But the cruiser commander in his reply speeches (said, as Passek witnessed, in a very poor and bad English) interpreted his ships visit in a different way. He always said that the cruiser had been sent only to greet the Duke, and that although he himself was very grateful for the reception given him by the Government, he had to declare that had there been no Duke here, Gromoboy wouldnt have been in the Australian waters either. "Frequent repetition [of words] about the aim of the visit, - Passek reported to the Russian Embassy in London, - finally cooled down enthusiasm of local officials, and they began to relate to us, Russian representatives, much colder and more constraint". Generally speaking, the Russian seaman underestimated the whole importance of events, he had been involved in, and which marked the birth of the Australian nation, and vigorously said the organizers of the celebration about it with a soldiers straightness.

In the meantime, the mishap was caused not only by the Yessens diplomatic clumsiness but also with a shortcoming in work of the central Russian departments  Foreign Office and Naval Ministry. The consul in Melbourne Passek, according to his words, had not received any preliminary clarification if the ship had been sent to be present at political celebrations or it had been sent only to greet the Duke. The incident itself became a subject of official investigation in the Russian Foreign Office.

The visit of "Gromoboy was marked by a mass defection of the sailors. 47 men jumped the ship during its stays in Sydney and Melbourne. Most of the defectors desired to reach the gold mines tempted by a hope to become rich quickly, what was written about by the captain in his official report. He explained the desertions by machinations of the Russian-speaking Jews, which were luring and driving the sailors inland, promising them easy money over there. Yessen had to leave in Melbourne the midshipman D. Vrangel, who would have to take the defectors aboard in case police found them. Some of the defectors were found; some returned voluntarily but by the time of ships departure from Australia the crew was 11 men short.

Despite the diplomatic mishaps the visit of "Gromoboy" to Australia is noteworthy as the Russian sailors took part in celebrations of the most important event in the history of this country  establishment of the Federation and forming of a new country.

* K.P. Yessen  later  kontr-admiral. During the Russo-Japanese War - commander of the Vladivostok naval detachment. On the 1 (14) August 1904 led his detachment in a battle against Japanese naval ships. The «Rurik» cruiser was sunk, but the rest of the ships returned to the base. This loss marred the Yeseen's reputation and became a reason of the decline of his career.