THE CRUISER “KREISER” IN AUSTRALIA 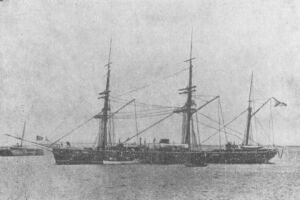 The cruiser “Kreiser” (on the photo to the left) visited Australia as well as the cruiser “Razboinik” on her way to the Far East of Russia where she was to join the Pacific Squadron. She was captained by the captain of 2nd rank N.I. Nebogatov – a Rear Admiral during the Russo-Japanese War, commander of the Russian naval detachment which would try to break through the Straight following the Squadron of Admiral Z.P. Rozhestvenskiy. Nebogatov preferred to surrender his ships to the enemy…

You are welcome to read a fragment from his report on the visit to .

… is quite a European city with splendid multi-storey buildings, superbly constructed steam and horse-driven railroads, lit by electricity and gas, in a word, it’s a city superior to the capitals of minor European countries. Houses, markets, lights, horse-driven railroads – all this has been built by the surged wave of English and American profiteers under stock-venture principles. The building, electric lighting, horse-driven railroads, mooring, etc. stock enterprises were established this way. All these enterprises were run in exceptionally large scope, which was far too broader than the consumer’s necessities. Thus, was built for at least 1.5 million people whereas currently there are less than half a million of them.

The consequences of this disproportion were revealed already five or six years ago by the fact that most of the houses remain empty, markets and shops are not occupied either, steam-engines drive empty cars every quarter of an hour, even horse-driven railroads don’t make any profit. The share price of all these ventures have fallen down to the minimum (for example, the nominal price of a horse-driven railroad is 9 pounds, but the current price is 14 shillings); the founders of these ventures, of course, made their fortunes and left for England and only broken shareholders stay here. Such a situation has been aggravated by discovery of new gold diggings on the West coast of rumored to be richer than the ones in the . Many people leave here with every steamer to prospect for gold on the new diggings.

Thus the already small population of dwindles. Bankruptcies of the best and quite successful local enterprises happen constantly due to the lack of labor and capital ebbed from here to the West coast… Nowadays suffers a financial and immigration crisis which will be hardly overcome too soon…