On the dawn of Aborigines of the Cammeraigal tribe which camped on the northern shore of the , noticed a small three-mast ship tenaciously sailing towards the English settlement, maneuvering and struggling against the wind. A white flag with blue cross was fluttering above the aft of the ship. At last the ship anchored in the where foreign ships usually stayed. Some time afterwards the Aborigines heard dull salvos – the foreigners were saluting the hosts of the colony.

Thus the first in the history visit of a Russian naval ship to began. It was the “” sloop with displacement of 370 tons, built in a wharf and previously called “”. In 1803-1806 the sloop made a circumnavigation, commanded by Yu. F. Lisniansky and I. F. Kruzenshtern, together with the “Nadezhda” ship. This time the aim of the navigation of “" was rather trivial – it was to dispatch cargo of the Russian-American Company (RAC) to the Russian America. The commercial interests had made reduce the number of the crew to the minimum and apparently, unlike the previous navigation, no naturalists or people inclined to write travel diaries were amongst the participants of the navigation.

The crew of the sloop was small – 5 officers, doctor, an RAC commissioner and 36 other ranks. Leontiy Andrianovich Gagemeister (1780-1833) (his portrait on the left hand side) was its captain. His ancestry was from the Baltic province of Russia, he graduated from the Naval Cadet Corps in St Petersburg and dedicated his life to service in the Russian Navy. Prior to the pacific navigation he had served in the Baltic Fleet and sailed to the Atlantic and Mediterranean. During his volunteer service in the English Navy the young Russian officer distinguished himself and deserved a praise from Admiral Nelson himself. The 27-year old captain was a well educated man, proficient in mathematics and astronomy, could read and write in Russian, German, English, French, Spanish and Portuguese languages.

Two other participants of the navigation were, as well as Gagemeister, of Baltic-German descent – doctor Karl Mordgorst and lieutenant Moritz Berkh, a future historian and admiral, commander of the Russian Black Sea Fleet. A young podshturman (junior navigator) of “Neva” Efim Klochkov was to make two more circumnavigations – as a shturman of the “Kutuzov” ship in 1816-1819 and as the captain of the Russian-American Company (RAC) “Riurik” ship on which he would come to the Australian shores again in 1822. Other officers – second lieutenant Alexander Kozlianinov and, apparently, shturman Ivan Vasiliev would also stay in Navy after the navigation. The cargo was supervised by the commissioner Rodion Zakharov, whose task was to collect data on opportunities of trade with the colonies.

“Neva” (picture on the right hand side - the ship near the Kamchatka coast) made the open sea out of Kronshtadt on 20 October 1806; the delays on the way led to the point that, after the call to Brazil in February 1807, it became clear to Gagemeister that it would be too risky to sail to the Russian America around the Horn Cape in those stormy autumn time and he chose a new route – across Atlantic and Indian Oceans and “roaring forties”. The brave navigators had not seen land for more than three months, and only on 26 May the shores of Van Diemen Land came into sight. On 15 June 1806 “Neva” was at the entry into Port-Jackson.

The Russian seamen came during a very complicated period of life of the young colony. Inefficient economy, based on forced labor of the convicts, a small number of free settlers, dependence of food import from England had led to the point that the real power had concentrated in the hands of the “Rum Mafia” – officers of the New South Wales regiment, which had been detached to guard the colony, and several major landlords. They had been pooling money  to buy delivered goods and spirits, and then reselling them to the convicts and free settlers for enormous prices, amassing huge profits. Rum, which fully belonged to them, had become the only hard currency. Trying to enforce law and order to the colony, in 1805 the English authorities assigned William Bligh – a steadfast and resolute naval officer - to the Governor’s position.

It was that captain Bligh whose ship “Bounty” in 1789 had been captured by her mutinied crew not far from Tahiti. The mutineers settled down on the uninhabited Pitcairn Island, and Bligh with a group of loyal officers, braving hardships, crossed the pacific in a boat and reached Timor. Having arrived in Sydney in August 1806, he tried to overthrow the local Mafia. The confrontation lasted nearly a year and a half. Seven months after the call of “Neva” in Port-Jackson Bligh suffered a new fiasco – the local officers headed by Major J. Johnston organised ‘Rum Rebellion’, overthrew Bligh and seized the power in the colony.

The Russian seamen had a chance to meet the main personalities of the oncoming drama. On 24 June 1807 Gagemeister wrote in his report to RAC:

“At the moment the local Governor Bligh is inspecting the inland towns, during his absence the acting Commander Johnston and chief of the Naval Department Mr. Campbell provided us with the utmost courtesy. (Robert Campbell – another personality of the early history of Sydney – who combined functions of the custom officer and merchant who delivered rum to the colony against all prohibitions.) The Governor Bligh arrived and yesterday paid us a visit, in the evening we were invited to his place for a ball.”

There is no data to judge how deeply the Russians could understand the conflict inside the colonial administration, but, undoubtedly, Gagemeister favored the Bligh’s position:

The current Governor by his good directions will, may be, increase the value of this settlement.”

The Bligh’s “directions” consisted exactly in attempts to break the trade monopoly of the officers and rich landowners, normalise the financial system, limit the uncontrolled usage of convict labor by well-off colonists in their own interests.

Of course, for the Russians the colonial economy was of much grater interest than the power struggle in it. The Russians felt some economical problems on themselves. “They have delivered us meat and supply us with bread and vegetables by the Governor’s order, - Gagemeister wrote. – Honestly, I did not want [to buy] fresh meat here as a pound costs 2 shillings, but… in five days I hope to sail away and don’t want from them anything else… Everything is excessively expensive here.”

Apart from it Gagemeister highly appraised the energetic activities of the English in development of the colony:

“This settlement is in initial condition, though surprisingly much has been done, apart from Sydney the towns of Paramatta and Hawkesbury have been founded, and coal is mined in the Guntus (Hunter) valley near the sea coast… The inner part of this vast island, barred by the highest mountains, is yet unexplored.”

They Russians performed interest to the condition of life of convicts, and especially to their successful return to normal life: the convicts are “under strict supervision at the State’s cost or, if their behavior wins respect, receive tickets of leave and can earn their living by any trade. The labor is so expensive, that many convicts have made big money over 10 years, particularly one of them, which now owns more than 30 000 pounds.”

Telling about the development of Tasmania which commenced in 1803, Gagemeister emphasizes that the convicts received land allotments over there. This interest to the favorable conditions of convict life in Australia would be expressed by the Russian seamen during following visits.

Despite the economical and administration difficulties suffered by the young colony, the Russians generally formed an optimistic outlook about its future:

“ The soil is fertile… Eventually, one should guess, - Gagemeister noted clairvoyantly, -  this land will abound in bread and almost everything what is needed for life, and due to the short distance from China and East-Indies, as soon as the local demand grows and products become recognised, a good trade will take place.”

Thus, already in the beginning of the XIX century Gagemeister foresaw that links with China and South-East Asia will play a significant role in the economical thriving of Australia, i.e., what is happening nowadays.

Gagemeister was the first in yet another field. He stressed in his letter to RAC, that Russia could find “advantage in trade with this part of the world, as all our products here are of a great value, and timber products, which are known as she-oak and better than mahogany wood for furniture, may be imported from here.” He also advised about possible participation of the RAC ships in intermediary trade between Australia and England, Australia and Brazil. The Russian seamen would write about prospects of Russian-Australian trade many more times, but in the XIX century it did not find development. Gagemeister also noted the navigation advantages of the route from the European Russia to the Russian America with a call to “New Holland” and emphasised the convenience of the Sydney harbor as an anchorage during far ocean navigation.

The Russian seamen were also interested in the life of the Aborigines what is evidenced by their ethnographic collection described by Gagemeister the following way: “Arrows for war games, simple with no notches – two, combat ones – four; the ones for fishing – one. Shields – one.” (The listed above arrows are, in fact, spears and harpoon, as the Aborigines didn’t know arrows.) There was also a special “plank to throw arrows” – spear-thrower. A straight cylindrical stake – this was, probably, a club, and skewed flat ones – boomerangs. The collection was sent to St Petersburg and nowadays it would be of a great ethnographic interest, but, unfortunately, its future whereabouts area unknown.

Bligh and Gagemeister developed warm relations between themselves. Russia and England were then allies (a little longer than a month left till the Tilzit peace agreement and temporary deterioration of Russo-English relations). Bligh had met Russians before, in particular, on the Unalashka Island where he called in 1778 on the “Resolution” ship during the third expedition of James Cook, and later in 1790-ties, when the Russian sailors assisted England during its war against the continental Europe. No doubt, at the time the foreigners from the far country ignited a lot of interest in the Sydney society. Gagemeister paid Bligh an official visit, and on 23 June received him onboard of his ship. The Russians greeted the high-ranking guest in accordance to all the rules of the naval etiquette and saluted with the ship cannons. On the night of the same day the captain and the officers were invited for dinner and ball to the Governor’s residence – so called Government House. It was situated in the Bridge Street, and Russian seamen would come here many times more in the following years. The elite of the local society, “gentlemen and their ladies”, as the “Sydney Gazette’ described it, were present.  At 11 p.m. the night sky was illuminated by firework, the dinner commenced at midnight, and then dancing lasted till the very morning. The party was a success and, who knows, maybe it was one of the last carefree nights fallen upon Bligh in Sydney… Anyway he had all grounds to write in his report to London that the Russian sloop ‘received every supply they wished for; and every respect and attention was shown to the Imperial Flag’. On 1 July 1807 “Neva” left the hospitable shores of Port-Jackson and in September arrived in the capital of the Russian America – Novoarchangelsk.

Gagemeister was to conduct two more circumnavigations – in 1816-1819 on “Suvorov” and in 1828-1830 on “Krotkyi”. Later he became the director of the Russian-American Company and director of a merchant navigation college. 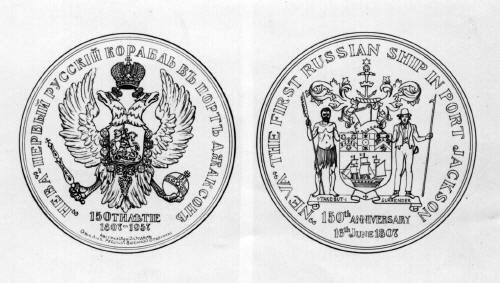 In 1957 the Australian section of the Historic Military Society issued a jubilee medal honoring the 150th anniversary of the visit of “Neva”. Thus, the Russians who settled in Australia immortalized the name of the first Russian naval ship which came to the shores of the fifth continent.