THE CRUISER “RAZBOINIK” IN AUSTRALIA 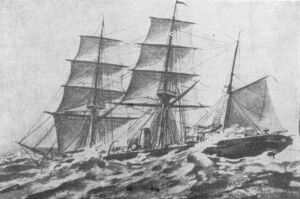 The cruiser “Razboinik” (on the photo to the left) sailed off on . As well as the cruiser “Kreiser” she was to join the Russian Pacific Squadron and called in on her way from Kronschtadt to . After a call in , Rio-de-Janeiro and Cape-Town  the ship headed to . Unlike the routes of other Russian ships navigating the waters of the fifth continent the route of “Razboinik” was lead by the north-wesernt and western shores of . In 1893 the seamen cast the anchor in the then poorly explored . During the four day stay in its waters the crew of “Razboinik” worked out a description of the coast of , collected brief data on the hydrological regime of the bay, flora and fauna of its shores and coastal waters. On “Razboinik” arrived in where it stayed till the 13th of April. She became the first and the only Russian ship which visited this port. It was commanded by the captain of 2nd rank P.P. Uhtomskiy (on the photo to the right) who during the Russo-Japanese War as a Rear Admiral and a junior flag-officer of the Pacific Squadron  would take part in the defense of Port-Arthur.

A special program of collection of data on the social-economic and demographic situation in the city was designed for the crew. The commander of the cruiser put the obtained data into a system and compiled a report which is offered to your attention after some reduction. It contains information about the stay in the Gulf of Exmouth,  a description of and a story of  that complicated economical situation which had befallen on the in the early 1890-ties.

REPORT OF THE COMMANDER OF THE 2nd RANK CRUISER “RAZBOINIK”

I stayed in the Gulf of Exmouth for four days. At the beginning of the holidays (Orthodoxy Easter - VK) gave those who wished leaves to have a walkabout on the deserty shore and do net-fishing. After the long ocean navigation it was quite a sufficient entertainment for the crew; they were collecting seashells, corals, sea sponges and other things wonderful to them.  But they performed the utmost interest to fish which is abundant here and has a lot of variety. Each time they would draw by net such a great variety of sorts as if the net had been cast into an aquarium full of different kind of fish.

On the fourth day of holidays, i.e., on the first  working day, I used the stay at the  excellent anchorage convenient in any regard for conducting of different kinds of drilling. It was a spacious anchorage with nothing to be entertained with, with right and stabile shore breezes, empty - all this tempted me to stay there for the fourth day in order to conduct some exercise feasible only at an anchorage. In the morning when the fresh breeze was still on I sent boats to sail, simultaneously two shields were set up - one was pyramidal for gun shooting, and another one for rifle shooting of the combat crew. They kept shooting in turn all day through till the sunset.

On the next say, 1st of April, I picked up the shields and at 10.30 a.m. under the sails raised the anchor and set off to Darwin. As we left the NW-Cape in distance the wind became quieter, so on the 3rd of April at 9 p.m. having becalmed I got up steam.

On the next day having got light wind pushing the cruiser at a speed of 2-4 knots set sails again. But this wind did not last long. This weather was quite typical for April when the SO-monsoon is not well set yet. In the evening of the same 3rd f April I got up steam and went on this way  under the full calm to the Port of  Darwin to where I arrived on the 8th of April at 3 p.m.

...During our stay in Port Darwin all crew in turn was granted a leave. The officers were also set free to go on shore for acquaintance with the city and the country. The call in may be referred as the most useful for the young officers in many regards. Each officer was given by me a special program of collecting …statistical and commercial data…, it was desirable to have this seaport, which has a certain future, explored in an extent as full as it was possible over a five day stay of the cruiser.

I have honor to report with pleasure that all officers from a junior to a senior related zealously to implementation of the task given to them and due to that the data was collected not only for the but for the whole .

The is a bay which deeply runs inland with three small rivers flowing into it. The town is named Palmerston and rests on the eastern coast of the bay on a small peninsula… The town… was planned a big city awaiting its role as the capital of the : the streets are wide and straight, well lit but uninhabited. During one trip with me the Governor pointed at such lit streets which had no single house on them, the street lights had been lit even before the sunset. It perfectly characterizes the colonial activities.

There are only about 1500 people in the town… out of them only 500 are Europeans, the rest are Chinese, Malaysians and other red-skinned tribes. The Europeans occupy administration positions, and the whole commerce is in the hands of the Chinese who also are the only laborers in the area able to work in such heat for low wages. But now the Chinese immigration is strongly inhibited by the general colonial legislation caused as it is explained by wishes to lift salaries of the Europeans. The whole area suffers from such prohibition, the works have stopped, as the Europeans cannot work in this climate but the Chinese are not allowed in.

The trade has ceased as well as there is nothing to export, the country does not produce anything.  There are two banks in the town, which seem to be subsidiaries of the major Australian banks, but both of them are close to being shut and I could not get money in either. The rail road goes from Palmerston to Pine Creek over 165 miles but this road built for the money of the English mother country is a grandiose but useless construction. It’s a narrow-gauge road and works only two times a week. But the building for the rolling stock and 16 superb houses for servicemen amaze by their grandiosity and uselessness.  These houses stay empty since the absence of European servicemen, the whole lot of the rail-road workers are the Chinese which are not allowed to live in these houses. Pine Creek – the furthermost point of the railroad is built in the area of gold mining which is also in decline due to the lack of capital, entrepreneurs and laborers…

The stay in Darwin turned out to be a very pleasant time spending due to the exceptional courtesy   and obligingness of the resident who performed such a courtesy that he drove me in his carriage and showed me all places of interest on many occasions, honored me by lunch and ball and, finally, arranged a military dance of the wilds – “karabora” for which the local savages had been summoned in the yard of the Governor’s house. I from my side tried to pay back with courtesy, arranged a major breakfast onboard of the cruiser for which also invited his sisters. Actually the resident was not only courteous but openly advised all possible information about the Australian colonies, projects of the English Government and by the end supplied me with official reference books about this province which I have an honor to enclose…

As to the food supplies Palmerston provides no conveniences part from that that they are very expensive here… it has to be ordered beforehand and the port would hardly be in a position to supply 3-4 ships simultaneously. This place is especially short of vegetables. The fruit are abundant but one could hardly say that they are cheap. Generally the gardening, trade and crafts – everything is in the Chinese hands which make up about a thousand in the port.

There is no fresh water in the port and the locals use the rain water which is collected in reservoirs during the rain season.

At on the 13th of April I raised the anchor and at did the open sea to proceed to my destination.

The West Australian newspaper on the 2nd of June 1893 wrote about this visit:


A Russian warship visited Port Darwin recently and caused some excitement in that not very lively town. The sailors were allowed on shore a day or two after the ship arrived. Their ignorance of the language and the customs of the residents at first caused a little uneasiness amongst householders, who on one or two occasions found the tars inclined to take possessions. Being unused to seeing the doors of anything but public houses open facing the streets, they marched into two or three dwellings in squad and would have been very much at home had it not been for the very natural desire on the part of the householders to see them off the premises. The conflict of languages - the Russ explaining, and Anglo-Australian doing his or her best to understand and explain in return - was laughable. The tars were on the whole a sober and quiet lot, and created no disturbances that required police intervention.