In October 1941 an Australian destroyer HMAS “Norman” visited the Soviet North two times. She brought with her the British Trade Union delegation which came to express support to the anti-German war effort. It was one of the first Allied naval ships to have come to which at that time was in great strain endeavoring to beat off the Nazis. This visit marked up the start of the Lend-Lease program of the Allied help to .

The HMAS “Norman” (on the photo to the left) was one of five new destroyers of the same type transferred to the Allied fleets, and she became an Australian ship. Her crew largely consisted of former seamen of HMAS “Sydney” – about 120 sailors had been transferred to “” earlier that year. And lucky they were – “”, the Australian cruiser which had taken part in naval operations in the and sent to the bottom Italian cruiser “Bartolomeo Colleoni”, was sunk off the West Australian coast by the German raider “Kormoran” – and there were no survivors…

Amongst the HMAS “Norman” crew was a young Perth-born sailor George Ramsay (on the photo to the right - year 1941). He joined the RAN before the WWII broke out and later took part in fierce battles against the Italian Navy, German U-boats and Luftwaffe in HMAS “Sydney” and “”. Many of his mates perished with the “” crew… He also saw active service in the and later – in the Pacific in the HMAS “Hobart”.

Herewith is an interview with him:

George, please tell about your stay in in 1941. 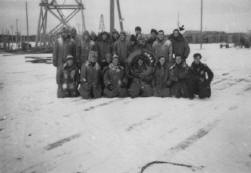 We spent a fair bit of time in anchored alongside a wooden jetty 2 miles across the bay from the city. I was surprised to see that everything was wooden – mooring, buildings… It was very cold and we did not have any winter clothing. But we went ashore and even tried to play Australian football (perhaps, it was the first Aussie Rules Game on the Russian soil – VK). Some of the guys managed to swap some winter clobber for cigarettes and chocolate from the locals but it was not enough, anyway. The best thing I saw obtained from the Russians was a fur hat (photo to the left - Australian sailors with a large selection of Russian winter clothes - VK). That’s why we didn’t go ashore too often as it was too cold and too wet in a small boat crossing the bay and we preferred to stay onboard.

Did you socialize with the Russians?

No, not really. We could not speak Russian, there were no interpreters. To tell you the truth, the Russians treated us with suspicion – we could feel it. There were female sentries with rifles on the wharf and always tried to chase away children which wanted to deal with us. But once we went to a certain place, kind of a compound or a cowboy house, which was only 5 minutes away from the wharf, where people drank and even made love (somewhere in the corner). We had a few beers in this very small canteen. The drink was quite basic and not of a great quality. It was kind of a railway signal box and when our time expired we were thrown out but the woman which ran the place – thrown us into the snow from a height of couple of meters.

What did you know or think about and what kind of feelings did you have towards and Germans before the war?

I didn’t know anything about . I didn’t know much about either but the clouds over had been gathering, the Germans were looking for revenge and I decided it was the right time to join the Navy.

Did you have a chance to meet your former enemies and allies after the war?

Yes, I am the President of the “HMAS “Sydney” Association” and I have met with the surviving Germans from “Kormoran” and Italians from “Bartlomeo”.

And what kind of atmosphere was it in?

Friendly, but no hugs and kisses: we used to shoot at each other… I still remember as we were trying to pick survivors from the destroyer “Espero” the Italian bombers attacked us as though didn’t want us to save their countrymen. Those Italians were happy to survive and grateful to us (George shows a photo with wet, covered with oil but smiling Italian seamen – VK). We gave them dry clothing, food and tried to cover their wounds.

Did you read the books “The ” and “HMS Ulysses”? If yes, did you like them?

I read both and liked “The Cruel Sea”, found it realistic but “HMS Ulysses”, from my point of view, contains a fair bit of exaggeration.

Do you reckon that depth charging of a U-boat, as it was described by Nicolas Monsarrat in “The ”, was justified whilst in the water there were still survivors from a sunken merchantman?

They had no choice – that was at war and they acted under orders. But I would not like to do it myself or to take such a decision.

Do you believe the Germans from “Kormoran” machine-gunned the survivors from the “”?

No, I don’t think so. They opened fire with a lot of small caliber AA-guns for half an hour and definitely would have killed most of people on the upper deck. But they would not have killed anybody in the water. The rest died with the ship.

Please tell what you would like to say about WWII. 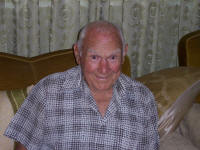 I feel now that I missed a lot. I was only a young bloke and many things which I could have done and seen went past me. I look around me now, see a lot of young people surfing or riding motorbikes, chasing lovely girls etc. and I envy because I never had it during 6 years of war. I had a relationship in England it was purely platonic and eventuated in nothing as we were transferred to the Indian Ocean. I was happy when the war was over and we won.