Soon after the withdrawal of the revolutionary Russia out of participants of the WW1 Great britain sent a military mission consisting of 560 people, to the Russian seaports of Murmansk and Archangelsk. Its aim was to train the White Army troops and to ensure that a large amount of military equipment dispatched earlier to supply the Tsar's army was not captured by Germany.

The mission, landed in Archangelsk, was formed on a volunteer basis and consisted of British and servicemen native of dominions. It included 6 Australians - three officers and three sergeants. The next, a more numerous mission, which landed in Archangelsk in the beginning of 1918, consisted of British, Canadian and American battalions and small units of French, Polish, Serbian and Italian armies. Several Australian volunteers were included into a so called Elope unit which landed in Murmansk. Later on British and several Australians amongst them were transferred to Archangelsk. The Syren mission stayed in Murmansk.

In August-September the Allies began to advance westwards towards the Onega lake and southwards along the Vologda rail road. The White army units remained in the rear of the advancing troops. The Red army didn't render any significant resistance to the advancing enemy as the Bolshevik command didn't consider this new front of the Civil war important. On the 11 November 1918 Germany capitulated. The Northern winter pinned down the Allies, nevertheless, they permanently had to engage the counterattacking Red army units. Most of Australians then act as advisors in the White army troops.

In the meantime the governments of the allied countries had come to a conclusion of a necessity to withdraw their troops from Russia, fearing an escalation of this new unpopular war. But in spring news of successes of the White armies in the South and East of Russia arrived to the North. It was decided to reinforce the allied contingent in order to support a southerly advance to join with the Kolchak's army. It was planned to evacuate the expeditionary force after that.

The reinforced expeditionary force (North Russia Relief Force - NRRF) was to consist of two brigades under command of generals Grogan and Sadlier-Jackson. The corps was formed on the voluntary basis as before. One of the first volunteers - a british major Harcourt - knew that there were still many Australian soldiers in England awaiting their departure to homeland. Apart from him a Warrant officer Charles Oliver - an Englishman, who had moved to Australia in 1910 and served in the AIF during WW2, was actively involved in recruitment of Australians. All up about 150 Australians enlisted in NRRF. They were included into the 45th Royal Fusiliers battalion and and the 21st machine gun battalion of the Sadlier-Jackson's brigade. Oliver managed to  to gain the Australians in separate companies and to get a permission for them to wear their uniform. It is noteworthy, that Australian officer volunteers wee not guaranteed to keep their rank in NRRF, what made one volunteer, a VC, to withdraw his application. One more officer - lieutenant Gipps, found himself only a corporal in NRRF.

What had become a reason for rather strong activity of Australians in this enlistment campaign? Some of them had arrived in England too late and had not have a chance to see a combat - they wanted to do it prior to their returning home. Meanwhile there were those who had distinguished themselves in previous battles, but had not had enough. Amongst those there were Gallipoli veterans sergeant Robinson and private Francis, veteran of battles at Ypres corporal Pearse, private Spies and NCO Jenkin who distinguished themselves in France in 1918. In June-July 1919 over a period of 4 weeks the brigade of Sadlier-Jackson was transported to Archangelsk.

Several companies were immediately sent down the North Dvina to the Bereznik village situated next to the front line in order to replace the corps units which had been there before. The Allies held the front line with a White army battalion. On the 7 July 1919 one of its companies rebelled and switched to the Red side. Some officers, including British, were killed. The mutiny exerted an extremely negative influence on general Ironside which lost any trust to the Whites and began to incline to an idea of necessity of a quick withdrawal of the Allied troops from Russia. 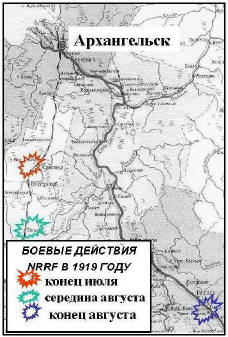 Meanwhile the Royal Fusiliers battalion and the 201st machine gun battalion, which included many Australians, under the command of major Harcourt arrived in Archangelsk. On the 16th of July Harcourt received an order to strengthen the positions along the rail road line stretched westerly towards Onega.: the British had received information about an oncoming offensive of the Red army. The offensive was to be accompanied by rebellions amongst the local population and in the White army units, therefore the Allies were to carry out police functions as well. The British units managed to have their task fulfilled - unreliable pro-Bolshevik troops had been disbanded and disarmed. They were replaced by british, Australians and loyal to the Allies White units.

Private Robinson later remembered this period of his service: "Our role in this area was mainly to patrol the slashings in the huge pine forests and to attack the Bolsheviks wherever they attempted to establish positions. One such position, a large machine gun post. was attacked by us and a number of the enemy killed. The Bolsheviks didn't bother to bury their dead but left them to rot where they lay. there were no casualties on our side".

On the 20th of July the Russians suddenly mutinied on the Onega River. An Australian captain Brown* was amongst few British who chanced to be in the center of events. He managed to have two mutineers killed, but after that he himself was shot and stabbed by bayonets. On the 22nd of July the Bolsheviks began their advance along the rail road and in the course of it they managed to capture 6 machine-gun block posts. Already in the next night their attacks on the Harcourt positions were stopped. In the morning, having made several counterattacks, the British re-captured all previously abandoned positions. During the day one of patrols came across a Red detachment of about 300 men preparing for a counterattack. A mostly Australian company suddenly attacked the Bolsheviks having inflicted heavy losses on them and made them run. The Australians themselves didn't suffer any losses.

In a week time new skirmishes, in which White army units fought alongside with the British, took place. An Australian detachment was ordered to capture a Bolshevik's gun situated on a railway siding. The attack was successful, many trophies and about 200 prisoners were taken.

With the situation now well in hand on the railway, General Ironside turned his attention to the forces along the Dvina. The Bolsheviks in amount of 6,000 men set up defensive positions on the both sides of the river. the positions were well fortified, equipped with machine-gun block posts and barbed wire. The General Sadlier-Jackson's brigade - two battalions of Royal Fusiliers, two machine-gun companies, an company of engineers and a White army brigade were detached to advance. The artillery support was to be provided by 22 guns.

On the 10th of August after an artillery barrage, in which smoke shells and mustard gas shells were used, the Allies quickly captured villages of Chudinovka, Kochimaka and Sludka. An Australian, private Brooke distinguished himself in the battle and later was awarded with a DSM. Somewhat later the Allies seized the villages of Borok and Gorodok. However, closer to the end of the day the Reds enforced the Allies to retreat from Sludka by a counterattack. Corporal Sullivan distinguished himself during the retreat. His platoon was engaged in a rearguard action and had to retreat across the boggy bed of Dvina. An officer and three soldiers began to drown, and Sullivan, having noticed that, with no hesitation jumped into the swamp and saved all four comrades. He was awarded with a VC for valour (A detailed story of this battle may be found in memoirs of another participant of the events - Ernest Heathcote). 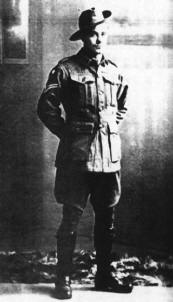 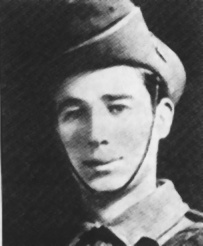 On the 11th of August general Rawlinson arrived in Archangelsk in order to replace Ironside and to conduct evacuation. He highly appraised the offensive action of the allies, having pointed out, that after it the Bolsheviks wouldn't be able to inhibit a safe evacuation.

But before the evacuation the Australians took part in one more battle near the Emtsa village situated on the rail road. The attack of the Allies was planned to strengthen the White troops positions prior to the departure of British. On the 29th of August a united detachment of the Allies and Whites suddenly attacked Red positions but the Bolsheviks rendered tenacious resistance. During the attack sergeant Sam Pearse made a cut in barbed wire fence and, after that, silenced an enemy block post by hand grenades. In several minutes he was killed by a machine gun burst (private Robinson witnessed this episode). Pearse was warded with a VC for this battle posthumously. Another Australian - sergeant Hill was severely wounded and lost his leg in this battle. Private Robinson was wounded too, and the Bible, which he always carried in his chest pocket, stopped a bullet and saved his life. By the end of the battle the Bolsheviks retreated across the Emtsa river, having blown a railway bridge. The Allies captured about 1,000 prisoners. 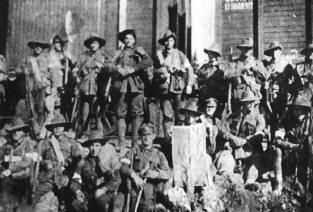 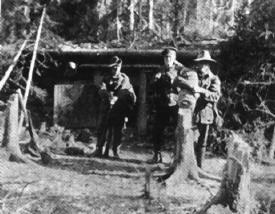 During the following four weeks the Allies handed over to the Whites all positions captured from the Bolsheviks and left for Archangelsk. Here they didn't forget to destroy huge stockpiles of military equipment accumulated in the seaport, as though they were understanding that the city would be seized by the Bolsheviks very soon. Over four days, by the 27th of September, all British troops had been evacuated from Archangelsk. 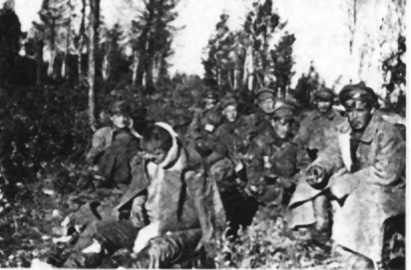 The Bolshevik POWs captured in a battle for Emtsa

The Australians of NRRF returned to England where they joined the 8,000 of the countrymen awaiting their departure to the homeland. The managed to have taken with them two trophy "Maxim" machine-guns sent to Australia for an exposition in a military museum (one of them is still stored in AWM in Canberra).

The participation of Australians in a war in the Russian North attracted nearly no attention in Australia and even caused some critical comments in papers. Later on no place for this episode was found in books on the history of Australian army. Only recently a short piece dedicated to the two months presence of Australians in Russia appeared in a military encyclopedia.

What was the end of this story? two Australians - captain Brown and sergeant Pearse died, several were wounded: sergeant Hill and privates Kevin, Purdue, Roinson, Lutherborow and Gaffey. Both VCs of this campaign were awarded to Australians, one of them - posthumously. Eight australians were awarded with DSM. The commander of most of Australians - major Harcourt also received an order. In 1929 he moved to Australia and fought in New Guinea during WW2.

The Allied expedition didn't help much the White cause. It only delayed the fall of Archangelsk for several months and didn't influenced significantly the course of the Civil War. Moreover, the association of the Whites with foreign invaders only helped the Bolsheviks in their patriotic propaganda. It cost Great Britain 15M pounds (prices of 1919), and brought about another black mark on the reputation of its initiator - an unsuccessful military strategist Winston Churchill.