Allied support for the White forces in the Civil war which followed the Russian revolution was a confused, and ultimately unsuccessful, endeavor in which Australians were involved in a number of capacities and in all parts of the country. Although limited in scope, operations by Royal Australian Navy vessels in 1918-1919 played a part in aiding Interventionist and White Russian forces in the Black sea and on the Crimean front in the face of renewed Bolshevik pressure. The most notable instance of Australian efforts in this area was the mission of HMAS Swan to the Black Sea at the end of 1918.

The Ukraine had been recognised as an independent state by signatories to the Treaty of Brest-Litovsk in March 1918, and had been immediately occupied by German and Austro-Hungarian troops. The only area not so occupied was an Eastern strip of the country which was held by the Don and Cuban Cossacks. At the armistice in November 1918 the Central powers vacated the occupied territory, leaving a vacuum which the Bolsheviks were eager and able to fill and exposing the flank of the Cossack position to red Army activity.

Both the Cossacks and the newly formed Volunteer Army under Denikin were anxious that the gap left by the rapid German retreat should be filled, and Denikin had for some time been negotiating for an allied intervention in the region. This never came I the form desire, and since Denikin and Ataman Krasnov of the Cossacks were arguing over the incorporation of the Cossack force into the Volunteer army, the Volunteer army was not prepared to fill the gap, and the Cossacks were not able to. The allies were backing Denikin and, in attempt to resolve the dispute between the two leaders, sent a low ranking delegation to the Don country to report to the true state of the Cossack forces. This was the mission to which HMAS Swan and the French destroyer Bisson were assigned. 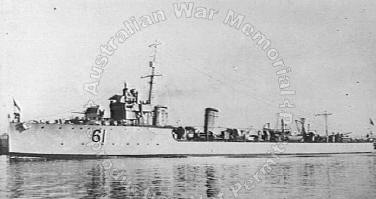 HMAS Swan had been laid down at the Commonwealth Naval Dockyard at Cockatoo Island on 22 January 1915 and was launched on 11 December the same year by Lady Creswell. The ship was a River class destroyer of 700 tons, and carried an approved complement of 72. Her main armament comprised one 4-inch gun, three 12-pounder guns and three 18-inch torpedo tubes.

Swan began her career as part of the British blockade force in the Far East. She was based at Sandakan, Borneo, in the latter part of 1916, together with HMAS Torrens and HMAS Huon, and remained part of the Malayan patrol until June 1917. In July she formed part of the Australian Destroyer Flotilla under the command of Commander W.H. Warren, RN, and took up anti-submarine duties in the Mediterranean. At the time of being detailed for the Cossack mission, Swan was part of the 5th Destroyer Flotilla and was commanded by Commander Arthur Bond, RN.

The two destroyers reached Kertch on the sea of Azov in the first week of December 1918. They found the White forces there to be in a poor state of organization. Bond noted in his report that, although the allied mission was rapturously received by the populace, he thought it improbable that the Volunteer army here "would ever have to take any important part in the anti-Bolshevik campaign".

The instructions from the Commander-in-Chief of the allied squadron were for the mission to make a general report on conditions at Marioupol, Taganrog and surrounding districts, since little or nothing was known at that time. The Russian Admiral Kononoff and a Russian army officer were attached to the mission as interpreters.

Leaving Kertch, the two destroyers embarked across the shallow waters for Marioupol, where again the mission was received enthusiastically by the general populace. Bond inspected the garrison and the local steel works, and preparations were made to move up-country. In addition to Bond and French Capitaine de Corvette Cochin, the party consisted of Engineer Lieutenant Commander George Bloomfield, Lieutenant J.G. Boyd and Paymaster Sub-Lieutenant D. Munro, who acted as secretary to the mission. Six ratings were included into the party, Petty Officers Neal and Swinden and seamen Bourchier, Robinson, Rostron and White. The French ship was similarly represented, and two Cossack Colonels and a former staff officer to the Tsar General Svetchin, were also attached. Travelling by train on the 8th, the mission made a brief inspection of Rostov before reaching Novocherkassk. Here, at the capital of the Don republic, the mission met General Peter Krasnov, the Ataman of the Don.

The entire garrison, of the Don Cossack regiment, lined the streets on their arrival, and the mission attended mass at the cathedral in company with the Ataman and the local hierarchy. There followed various festive entertainments, two of which Bond saw fit to note in his report.

In the evening an official dinner as given in the Place of the Ataman, in which speeches were made by many of the prominent members from the Don and Kouban districts stating their aims for the regeneration of Russia. Again, as throughout the whole Mission, it was necessary in reply to express the utmost sympathy with the regiments who were fighting so magnificently against the Bolsheviks, and to state clearly that we were enquirers only, and could state no Allied policy.

The local leaders, however, clearly wished to construe the mission as a sign of willingness on the part of the allies to provide military aid, and Bond was forced to continually state their position as sympathetic observers. This happened the very next day at a banquet given by the Krug, or Cossack assembly, "at which speeches of the same character as the previous day were made".

Inspections were made of the cavalry schools and various training establishments in the area. The officers of the mission dined privately with the Ataman, and received various deputations from the local population. The officers then proceeded on a tour of the front line by motor car and military railway, while the ratings remained behind. After inspecting forces at Kanteminiovka and Bontourlincka, and attending another mass for the allies, they arrived in Tolovaia to view the heavy artillery at work. 60,000 Cossacks were said to be holding a force of 720,000 Bolsheviks on this front, and although the figures were doubtless exaggerated for the visitors benefit, the Cossacks were certainly hard pressed. A visit to Bobrov had to be abandoned and a hasty retiral made in the face of a local breakthrough by the Red Army.

Bond noted that at this time the Cossacks were dependent for ammunition and field guns on what they captured in cavalry charges from the enemy. He continued that

Several of the Commanding Officers on this front told me that their Cossacks were very fatigued, and that a sight of the Allied Officers put new heart into them. 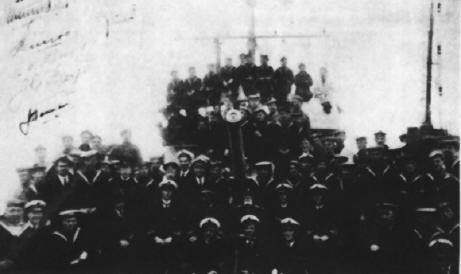 Officers and crew of HMAS Swan with Russian oficers and Cossacks. 1918

The mission then returned south, inspecting a new shell factory at Taganrog. Bond then decided to proceed to Ekaterinodar and submit the military information he had gathered to General Poole, head of the British Military Mission that was aiding General Denikin. That Pole managed to convince Crassnov to join forces with Denikin and the Volunteer army in January 1919 probably owe something to the intelligence provided by the officers of HMAS Swan, since it would have emphasised the hopeless position the Cossacks faced without the provision of equipment from the allied-backed Volunteer army. Kenez (a historian, author of Civil War in Russia) has stated that the mission was easily fooled by the lavish reception afforded them, but that their favorable report didnt influence General Pooles determination to see the Cossacks brought under Denikins command. Having read Bonds report, which Kenez didnt, I can only conclude that whilst Bond evinced sympathy for the White cause, he was not blind to the Cossacks shortcomings.

When the mission departed, Ataman Krasnov decorated its members. Bond was awarded the Order to St Vladimir 4th Class with Swords, whilst the other officers received the Order of St Anne 2nd Class. The ratings were each awarded the medal of the Order of St Anne. The two ships then proceeded to Sebastopol, where the ships guns helped protect the railway station at the head of the valley of Inkerman from enemy attentions, and Bonds report was sent to the Foreign Office. On 3 January 1919 the Australian Flotillla sailed for Plymouth. HMAS Swan returned to Sydney on 21 May 1919.

In addition to the activities of HMAS Swan, HMAS Yarra and HMAS Torrens were also involved in the Black Sea area, being the first two destroyers to take up stations at Novorossiisk and Batum. HMAS Paramatta carried despatches and mail between Constantinople and Sebastopol from the time of the Turkish surrender until early January 1919. Paramatta also acted as escort for a group of Russian warships, which were handed over to the anti-Bolshevik forces at Sebastopol in late November 1918. All these operations appear to have been free of incident.

The British Military Mission remained in South Russia throughout 1919, and was only evacuated in March 1920 after Denikins forces were routed by a Red army offensive, and the collapse of the White cause seemed imminent.