In literature about the WW2 published in the West a theme of "The Great Escape" is rather popular. Memoirs, historic researches, documentaries and movies have been dedicated to it…

On the night fro the 24th to 25th of March 1944 several dozens POWs escaped from a concentration camp Stalag Luft III (160 km SE of Berlin near the town of Sagan (now Polish Silezia)) in which imprisoned airmen of different nationalities were kept behind barbed wire. Actually, it was a common event – POWs always want to make a breakthrough to freedom. Moreover, unlike the Soviet POWs which were under a threat of being shot in case of being re-captured, the airmen of the Allied Air Forces didn't risk their lives too much: the Germans didn't shoot escapees but usually transferred them to penalty camps.

Stalag Luft III was purely an officer camp under control of Luftwaffe. By the end of war there were about 10,000 POWs in it. The conditions of life of the airmen were quite satisfactory. They were fed well, weren't employed in hard labor, were allowed to do sports and organize exhibitions of crafts and theatrical performances. The airmen received Red Cross parcels and often ate better than their guards. Nevertheless, escapes through tunnels under the barbed wire fence were a frequent thing. For example, the leader of the group which did The Great Escape, a Spitfire squadron leader Roger Bushell managed to reach Prague after his first escape in 1942 and was re-captured only during mop-up operations conducted after the assassinations of Heidrich. Amazingly, a Czech family which had hid him was fully shot, but Bushell himself and his comrade escapee a Czech "Jack" Zafuk survived.

The Great Escape had been prepared over a long period of time and planned and premeditatedly. It is noteworthy, that many of the guards helped the potential escapees handing them maps, train schedules, blank document forms, etc. Usually it was not done for free of charge – POWs bribed the guards with cigarettes, coffee and chocolate from the Red Cross parcels. Of course, the camp administration did its best to prevent escapes. A special group of trained "hound dogs" which constantly checked up all premises and all the camp territory in regard of tunnels, was amongst the guards. They often managed to have discovered tunnels leading beyond the fence. It is interesting, that several times the administration gave a chance to have a tunnel dug up to the end only in order to bury it and made the POWs to start again from the beginning. Of course, there were informers and rats amongst the airmen, which reported the plans of POWs to the administration.

In spring 1943 the airmen began digging a tunnel for The Great Escape. Initially a shaft about 9m deep, from which the tunnel started, was sunk in a corner of a barrack. It was dug through loose sandy ground that's why they had to timber the walls and the roof of the heading by planks, which they had in turn to take from their own beds. Earth haulage was done by a small cart rolling on wooden rails. Everything was like in a normal tunnel – ventilation, lights, etc.

Actually, the airmen were digging three tunnels in case one or two were found by the "hound dogs". And indeed, one of the tunnels was found by the guards and buried. Another tunnel was stopped and used for stockpiling of spoils and various gear necessary for the escape. Finally, the airmen focused on the "Harry" tunnel, the final length of which made up 105-110m. The escapees had not calculated the length too well and the tunnel stretched about 30 meters beyond the fence had been stopped only in several meters from forest… 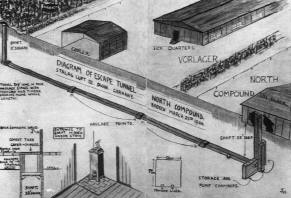 Scheme of the "Harry" tunnel position. To the right – the shaft sunk under a gas stove. In the upper left corner – exit from the tunnel near the forest edge (from the book "The Longest Tunnel")

By the end of March 1944 everything had been ready for escape: civic clothes, documents, money, food. 270 POWs were ready for a breakthrough. On the night from the 24th to the 25th of March the airmen began to come down the shaft. In the night time the guards of watch towers could not see the exit from the tunnel as the search lights were aimed at the camp barracks. However, the camp was also guarded by patrols, which walked the camp around the fence line. A patrol turned out near the exit every 5-6 minutes, that's why only 10 men per hour instead of planned 50-60 could get out of it and crawl up to the saving forest edge when a patrol was out of sight. Thus, a calculation mistake had led to the point when before the dawn only 76 men had managed to escape from the camp. At 4.55 a.m. it became lighter and a guard finally managed to see the exit from the tunnel. Two POWs who had not managed to get far from the camp, were re-captured almost immediately. Most of the escapees failed to find a railway station in the dark and catch night trains. Time was lost and nearly all of them were re-captured not far from Sagan.

Only three airmen managed to find freedom. They were Norwegians Per Bergsland and Jens Mueller and a Dutchman Bram van der Stock previously of RAF. The first two reached Sweden, the latter managed to have reached Gibraltar via Holland, Belgium, France and Spain.

The news about the Great Escape reached Hitler and drove him mad. He immediately demanded to shoot all re-captured escapees. Goering, Keitel and some other representatives of the German High Command tried to calm him down and called for common sense. The persuasion led to the pint where the head of the Third Reich "calmed down" and ordered to shoot and cremate "more than a half of the re-captured". A Directive with a list of 50 airmen subject to execution signed by Himmler reached the Gestapo. 23 airmen were returned to concentration camps.

Amongst the executed there were 22 British, 6 Canadians, 6 Polish, 3 South Africans, 2 New Zealanders, 2 Frenchmen, 1 Lithuanian, 1 Greek, 1 Czech. There were also 4 Australians amongst them:

News about the execution of POW airmen reached Great Britain in July 1944. Anthony Eden, the Foreign Minister of Great Britain announced in his parliamentary declaration that the organizers and perpetrators of the execution will be found and punished.

After the end of war a group of the Special Investigation Branch (SIB) RAF under command of lieutenant MacKenna (died in April 2002) launched an investigation of circumstances of death of POW airmen. Persistent search for the murderers succeeded and 13 participants of the executions were trailed and hanged in Hamburg in February 1948. Some participants of the events who had not taken part in shootings, were sentenced to different terms of imprisonment. At least five Gestapo murderers committed suicides before arrest or in investigation jails. One of the murderers – police commissar Hunter Abasalom died in a Soviet jail in May 1948. Some Gestapo men from Breslau including Luxe, who had not less than 27 shot escapees on his conscience, including the Australians Williams and Hake, died in fighting against the Soviet troops during the last days of war. Three more were hanged by the Czechs.
F. MacKenna

The fate of the Chief of Gestapo of Breslau Dr Scharpwinkel (it is interesting what kind of diseases he cured or what kind of science he was into – VK) who had personally taken part in executions of POW airmen, including the Australians, was remaining unknown. The investigation led MacKenna to two possible witnesses of Scharpwinkel’s death. One of them, a nurse in a military hospital in Breslau Herda Sembrodt and her husband – a wounded German soldier in the same hospital advised the following:

On the next day after capitulation of Breslau, 10th or 11th of May two Russian officers entered the reception together with the doctor Meling (chief of the hospital). There was a Russian woman in civic clothes and revolver in her hand along with them. The woman yelled: "Where is captain Hagaman?" One of the wounded replied: "I am". The woman ran up to him and, threatening by the revolver, ripped the blanket off him. "You are a liar! You are Scharpwinkel, Chief of Breslau Gestapo. Stand up!" – "I’m wounded, wounded in my leg". She shoved revolver into his ear: "If you don’t stand up, you’re dead!" The wounded man limped to the middle of the room calling for doctor Meling. It was useless – the doctor had been also under arrest for harbouring. They were pushed out of the room.

In a minute or to we heard a machine-gun burst. Scharpwinkel was shot…

Nevertheless, Gerda replied negatively when asked if she had seen Scharpwinkel’s body. Nobody had seen bodies or blood on the earth. Gerda and her husband decided that the Russians had taken the bodies with them.

MacKenna suspected that something was wrong and presumed that Scharpwinkel had been taken by the Russians away for further interrogations. He was right – the former Getsapo man was in Moscow. One of the SIB officers Maurice Cornish spent three months in Moscow and twice interrogated Scharpwinkel in the presence of English- and German-speaking Soviet security officers. Scharpwinkel confirmed his participation in the executions of the Allied airmen. However, the Russians refused to hand him to the British, having explained it by their wish to exchange him for a certain "baron" - owner of one firm in Cologne. The British Foreign Office requested for information about crimes committed by the "baron", but the Russians refused to provide it. The investigation was stopped.

Later on MacKenna found out that the Russians requested to hand him Anton Kindle who had served as a commandant of the Saxenhausen concentration camp. The British special services did not mind the exchange but the Foreign Office refused to allow it with a comment: "We are not doing barter of men". Everybody tried to forget about Scharpwinkel. Nevertheless, during interrogations in Moscow he gave the British some valuable information, having advised that some of the re-captured escapees had been held in Gestapo of Kiel. The investigation followed this way but the Chief of Kiel Gestapo Friedrich Schmidt and his deputy Johannes Post had disappeared. The British found only the truck drivers who moved the bodies of shot airmen to crematorium - Struve and Denkmann. They helped to find the huse of Post’s girlfriend – Marianna Heidt. She also had disappeared, but they found a photo of her with her lover in the house.

In the summer 1947 MakKenna visited the Minden camp where military criminals were held. And here the luck found him – he recognized a man from the photo in a German who called himself Johannes Polman and that was Post. During interrogation Post did not stand firm and admitted his participation in the execution of POW airmen, including Jim Catanach. He declared the following:

To the glory of Fuhrer I have killed many a subhuman. I used to kill non-Arians, wonderers, Gipsy, Jews and politically defective. Fuhrer personally awarded me… I only regret that I have not killed more. I would want to have more chances to kill people like you. You ruined our cities and killed our women and children. Those airmen-terrorists I shot were not of a higher value for the Reich than all the subhuman killed by me.

He was sentenced to death and hanged.

There are two versions of the fate of Scharpwinkel. According to the data of an official statement of the Soviet authorities he died in a Soviet jail in 1947. According to other information, later he turned out in the administration of the Soviet occupation zone in the Eastern Germany. Maybe, on of the visitors of this web-site will cast light on his fate.