Florence MacDowell - an Army sister of the British Red Cross during WW1 - was born in Melbourne. Before the war she had been a Sister in the Australian army, later worked in hospitals in Melbourne and Adelaide until she established her own private hospital "Windarra" in Toorak. just before the war she had gone abroad and stayed in Italy when the war started. She reached England and joined the British Red Cross which sent her to Serbia to a hospital at Vranitzka Banya.  Having returned from Serbia she joined the Millicent Fawcett Union (a Red Cross organization) subsidized and sent to Russia by the "Great Britain - Poland and Galician Fund".

MacDowell was Matron on the Galician Front of the 52nd Epidemic Hospital Zaleschiki, and also of the 92nd Surgical Hospital, Podgaetz. She lived through the revolutionary events of the 1917 at the front and survived the retreat of the Russian army from Galicia. Her field hospital was saved from captivity by the British Armored Car Division, which in 1916-1917 fought along with the Russian army at the Caucasian, Romanian and Galician fronts. 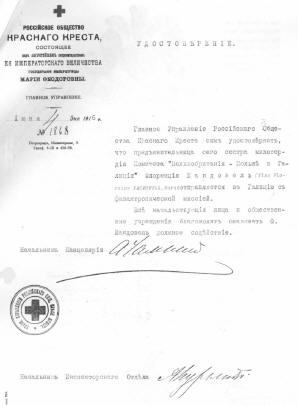 A Certificate  given to Florence MacDowell by the Russian Red Cross

After the War she lived in England and Canada, working in pension and welfare organizations. Having learned well the life conditions in the slum areas of London, Liverpool and manchester, she took an active role in organization of child migration from England to British dominions. After her return to Australia she kept working in different  state's institutions.

The data of this page was received from Australian War Memorial