AUSTRALIA'S TROPHIES FROM THE CRIMEAN WAR

Australia's isolation and early distribution of obsolete ordnance and war trophies into the care of local communities, or military authorities, has been a major factor in their survival. One small group of trophies from the Crimean War (1853-56) has survived.

Trophies were of such importance to the British and French that on 10 July 1855, a treaty was signed at Paris representatives of two governments. The treaty records the agreed distribution of trophies as the conclusion of the Crimean War. Other allied participants, the Ottoman and Sardinian Governments, agreed to the terms of the treaty at London on 15th of November 1855...

At the end of the Crimean War a large number of trophies were supplied to Britain and distributed to cities and towns in the United Kingdom, and Colonies. An address to the House of Commons during 1863 provides a list of 1165 Russian guns taken at Sebastopol. Included on the list are 730 iron guns and 324 iron carronades.

In recognition of these large contributions, each colony, except small Western Australia, was awarded a pair of Russian trophy guns. Victoria's two trophies arrived in Melbourne's Botanic Garden during December 1858. They remained in the Gardens until April 1867, when they were moved to Victoria Barracks on St Kilda Road. The reason for it was a change in policy towards trophies in Great Britain which demised many of them. 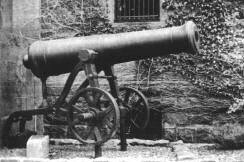 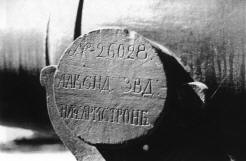 The gun N26028 of the Alexandrovsky Works located in Melbourne

Adelaide's two trophies were also first installed in the Botanic gardens, during February 1859. In 1867 they were used to announce the arrival of the Duke of Edinburgh. Some time later they were removed from the gardens and were handed over to the military authorities, who placed them in front of the armoury on North Terrace. One of the guns was fired daily as the time signal at midday. In the mid-thirties XX century they were moved to their present position on Torrens Parade Ground.

New South Wales initially located trophies flanking Governor Bourke's statue on the Domain, near the old Bent Street entrance. These two guns were relocated to Centennial Park which wa set up in 1988 to mark the centenary of European settlement in Australia. Mounted on a rise, the trophies now flank the "We Won" statue. 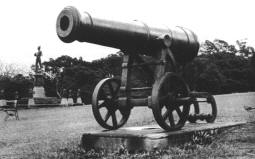 tasmania's two trophies are interesting as they are different from the Russian cannon in the other States. On their trunnions they are marked as "Pushko-Karronad" so they are either a hybrid from of carronade or gun-howitzer design. Nowadays one of them adorns the main gate at Anglesea barracks in Hobart. The second gun is located in Launceston. 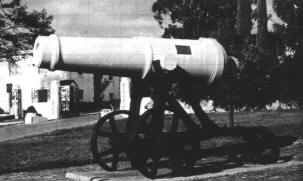 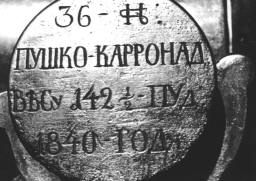 Shifting of trophies to remote corners of big cities, possibly, had its pacifist motives due to the publicity given to carnage of the American Civil War. Similar attitudes surfaced during the closing stages of the Vietnam conflict when some First World War trophies appear to have been removed from public spaces.

The survival of the Crimean trophies points to another factor. They are all of cast iron and mounted on wrought iron garrison carriages. Therefore, they were not vulnerable to the rising damp that brought about the downfall of later trophies.

In 1917 these guns were nearly returned to Russia. On 18 January 1917, the prime Minister Mr WM. Hughes, wrote to the governor-general requesting him to telegraph the following message to the Secretary of State for the Colonies:

Representations have been made that Russia would very highly appreciate the return of cannon captured during the Crimean War and now held by Commonwealth of Sate Governments throughout Australia. It is thought that this would be regarded as an outward and visible sign of the inward spirit of the entente with Russia which the Russian Government and people would value very greatly. Shall be glad to learn if there is any objection to proposed action.

The Secretary of State raised no objection, but pointed out that due to a shortage of shipping tonnage, it might be difficult or undesirable to return the guns. To which the prime Minister replied that there was no problem as Japanese tonnage wa available to Vladivostok. It would appear that the October Revolution of 1917 intervened, as the Crimean trophies remained in Australia.

The highest military award of the British Commonwealth is Victoria cross (VC) still made of steel of a trophy Russian gun . The award was established in 1856 by the Queen Victoria soon after the end of the Crimean War. It is cast "For Valour" on one side, and a date of act of heroism on the other. The first Australian to have ben awarded with VC was captain Neville House who had distinguished himself at a battle of Vredefort during the Anglo-Bour War on 24 July 1900. After that 5 more Australians were awarded with VC during that war, 64 - during the WW1, 2 - during the British intervention in Russia (1919), 20 - during the WW2, 4 - in Vietnam. In January 1991 the tradition was terminated and now Australia makes her own VC - Victoria Cross for Australia.